Stop the Nazi Exposition in Den Bosch – No platform for Nazi art!

Starting from September 8th onwards the Design Museum in Den Bosch, the Netherlands, will hold an exposition concerning ”art” from the Nazi’s. The exposition is called: ”Design of the Third Reich 1933-1945”. This exposition is under an umbrella of trying to understand the machinations of fascist propaganda. However, statements from the director of the museum, Timo de Rijk, show an image far removed from that. He has stated not only that the design aspects are aesthetically pleasing but also worth studying. We as Communist Youth Movement (CJB) are fearing the exposition will attract a lot of right-wing extremists and (neo-)Nazi’s. 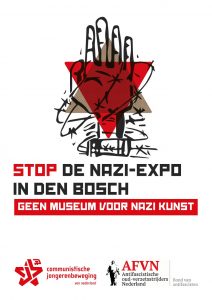 Stop the Nazi Exposition in Den Bosch – No platform for Nazi art!

of the Nazi occupation of Den Bosch. After which our organization was invited by the museum to discuss our concerns. These conversations have left us as an organization deeply worried that this exposition is handled inadequately.

The exposition of Nazi-art, fascistic symbols and images together with other fascistic objects are not helping to form a better understanding of the past. It does, however, ensure a surge in extreme right-wing ideas, such as discrimination and racism and it furthers polarization in our country.

This is first because art and its contents cannot be separated from each other, which makes an exposition about fascistic art and fascism from a neutral or ”objective” point of view impossible. Anybody who wants to show the effects of propaganda on society will show propaganda.

Secondly, because art and design marginally influenced the Nazi’s successes between 1933 and 1945. The successes of the Nazi’s were from street violence and persecution of all their perceived enemies, starting with communists, social democrats, and trade-union members. Their success was also measured in repression independent art and cultural expression.
When Mr. De Rijk states in Dutch newspaper Trouw (January 9th, 2019) that: ”fascism’s rise was done notably by the use of smart use of design”, it can only be seen as downplaying the use of terror which was the real rise to power of fascism.

Furthermore, Nazi art is not exceptional, even less progressive or modern – which is stated by the director of the Design Museum of Den Bosch in the same article.
Both in film and architecture the Nazi’s used elements of art movements of its time or made use of bygone art movements. Anyone who presents Nazi art as something unique is therefore unequivocally helping with the normalization of fascism.
There is also the fact the Mr. De Rijk has stated that his goal is to make these expressions of Nazism part of a public debate in Germany, where it still is taboo, and in time ensuring that other design museums around Europe feel confident enough to also make similar expositions.

Even more repulsive to note is that this exposition will be held right in front of the location of a former synagogue, which since 2016 houses a memorial with all the names of the Jewish victims of the Nazi occupation.

It is our opinion that The Netherlands should not be at the forefront of the normalization of fascism. This is even more so in a time in which right-wing extremist politicians and neo-Nazi organizations are gaining ground in Europe.

We as Communist Youth Movement will battle any and all expositions in which ‘design’ or ‘art’ of Nazism is put to center stage, instead of the reactionary role fascism has played and the horrific substance of its ideology.

That is why on the day of the opening of this exposition we have organized a public demonstration, with support of the organization of former resistance fighters AFVN.