Statement on the escalation of the war in Ukraine; capitalism is the cause of the war 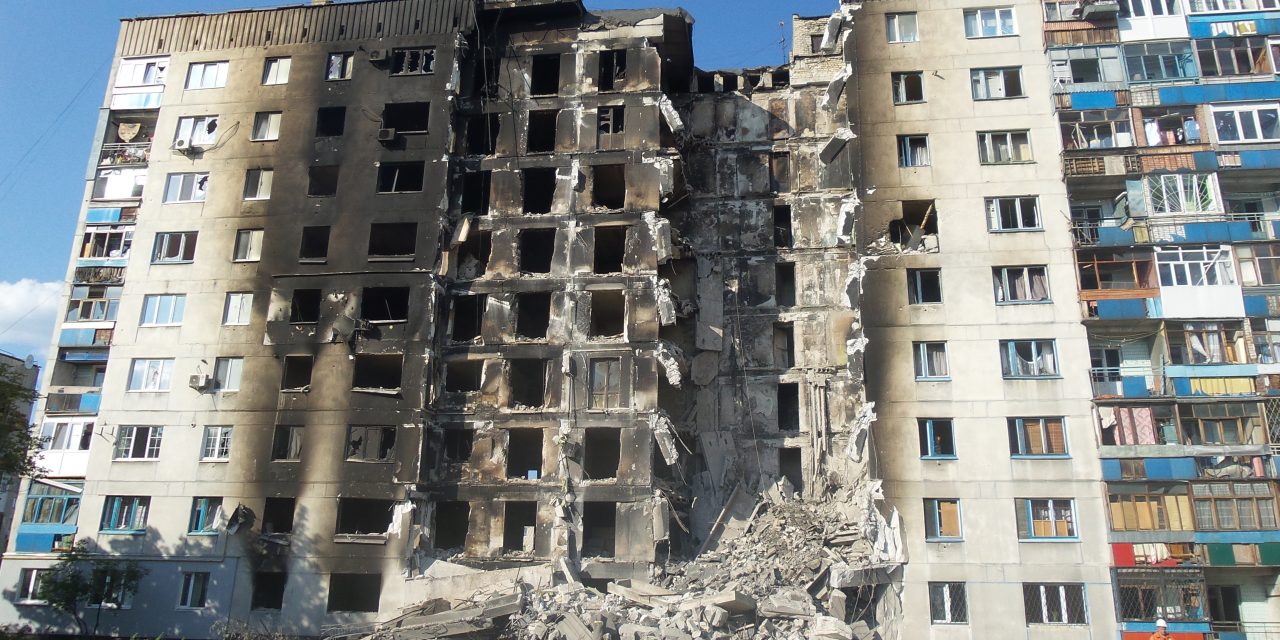 Picture of a burned out appartement building in Lysychansk

For decades, the people of Ukraine and Russia lived in peace and jointly built a better future in the socialist Soviet Union. But thirty years after the overthrow of socialism and the dissolution of the Soviet Union, tensions between two imperialist camps in Europe have erupted and human lives are again being sacrificed for the interests and profits of capital.

The capitalist economy is in the hands of private owners who are constantly engaged in fierce competition among themselves. Capitalism and imperialism therefore create a constant climate of conflict, threats and rivalry. The war in Ukraine is therefore the result of a prolonged escalation by both sides, who are after spheres of influence, markets, raw materials, industries and transport routes. On one side are NATO, US and EU, which support the reactionary Ukrainian government. On the other side is Russia, which is now a capitalist country, and its allies, supported by sections of Ukrainian bourgeoisie who have an interest in closer ties with Russia. This is the real cause of the conflict and the contradiction that lies behind the hypocritical preaching of “democracy” and “security” from NATO and the EU on the one hand, and the nationalist rhetoric from Russia on the other.

The US, NATO and EU poured fuel on the fire with their aggressive stance in recent years. For example, by signing association treaties with Ukraine to promote trade with Europe and to hinder trade with Russia, by supporting the 2014 coup by reactionary forces in Ukraine, by extending NATO membership to the Russian border despite agreements, by sending weapons to Ukraine. The US, NATO and EU are supporting paramilitary and fascist organizations such as AZOV, Right Sector and Svoboda, which were later used as military shock troops against Donetsk and Lugansk.

All this went against the interests of Russian capital. On Monday, Russian President Vladimir Putin questioned Ukraine’s sovereignty through a speech full of anti-Communist and anti-Soviet rhetoric and distortions of history. On Thursday morning, Russian troops entered Ukraine. Russia declared a “special operation” in the Donbas region where the so-called “people’s republics” Donetsk and Lugansk have been located in two Ukrainian provinces of the same name since 2014. These two areas were recognized last Monday by Russia as independent republics that lay claim to the entire provinces as their territory. Western NATO and EU countries are hypocritically speaking outrage over the Russian recognition of these breakaway regions, while the recognition of Yugoslavian republics by the same Western states at the time seriously fueled the bloody war.

There is fighting in several parts of Ukraine. It seems that Russian forces have defused the Ukrainian air force and entered the capital Kiev. Meanwhile, Ukraine has cut diplomatic ties with Russia. The U.S. and NATO are sending thousands of additional troops to Eastern Europe. Several European countries have also opened their borders to Ukrainian refugees. This is in sharp contrast to how refugees from other regions are treated, showing that this is being done for geopolitical reasons rather than humanitarian ones.

The Dutch government also bears great responsibility for the increasing antagonisms and escalation. The Netherlands supplies weapons and other military resources to Ukraine, has stationed hundreds of military personnel in Eastern Europe within the framework of NATO, and since Thursday Dutch fighter jets have also been deployed in Eastern Europe for NATO. In addition, the Netherlands has an important facilitating role for NATO, for instance as a transit port and storage facility for U.S. military equipment.

Both the imperialist US, NATO and EU, and imperialist Russia are waging this war on the backs of millions of innocent working-class people to secure the profits of big business. This situation in Ukraine can only lead to slaughter. The working class of Ukraine and Russia, of the Netherlands and worldwide, need not expect anything from one imperialist or another. The hope for lasting peace can only be realized through the struggle of the working class and its allies against imperialist alliances, against the capitalist system that produces imperialist interventions and wars.

That is why we say: