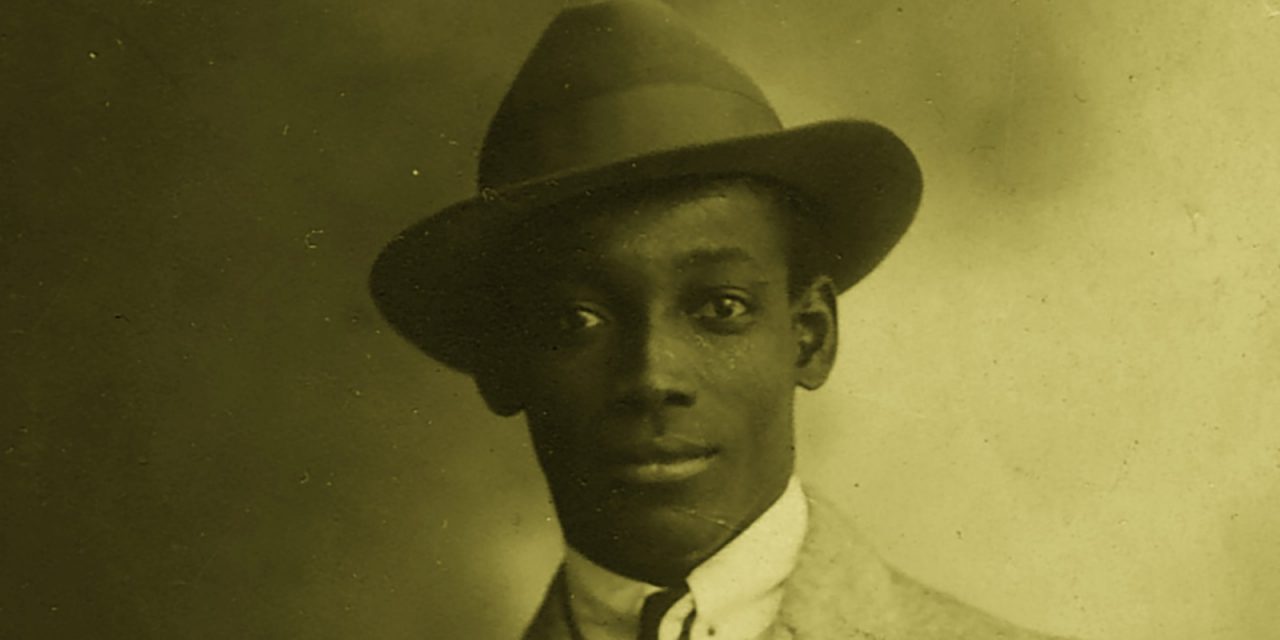 Anton de Kom was born on the 22nd of February 1898 in Suriname. He was born into a family of 6 children – 3 girls and 3 boys. His parents encouraged him to study and he spent his youth musing over many books. His first job was at the Balata Compagnie, where already he was exposed to much injustice and exploitation. Through Haiti he went to the Netherlands, where he arrived on the 1st of November 1920. Here he met his wife to be, who would bear them four children. In 1933 he returned to Suriname, but got arrested within a month and was banished to the Netherlands by the colonial authorities. Upon the Nazi occupation, he joined the Dutch resistance. On the 7th of August, he was captured by the Nazis and wheeled off to a concentration camp. There he met his end on the 24th of April 1945, succumbing to tuberculosis. The work by which Anton the Kom is best known nowadays is his book ‘We Slaves of Suriname’.

We slaves of Suriname

From 1926 on, Anton de Kom started collecting information for his book, “aiming to rouse the self-respect of the Surinamese People”, for “no people can fully mature that suffers still from a hereditary inferiority complex.”

In 1934 his book finally got published with the aid of communists. In the book, the coloniser’s crimes, from 1667 until his day, receive their due unapologetic treatment. The necessity of such a work was made evident by the fact that Dutch school books taught children an entirely different picture of Suriname. Colonialism today is still frequently played down or even justified in the Netherlands. In 2019, a book by the name of ‘Poet in the Jungle’ (Dichter in de Jungle) managed to win an important literary prize. This jungle poet was, in fact, a military figure, tasked with repressing slave rebellions. Imagine if a book called ‘Singer on the Rhine’ came out, describing the adventures of a Nazi soldier. Unthinkable, of course! When it comes to the transatlantic slave trade, however, this is apparently not a problem, and Dutch colonialism still gets played down in this way.

Anton de Kom’s book does not only mention the crimes of the slave trade, it also presents an economic analysis of the transatlantic slave trade and the colonisation of Suriname. The argument of colonisers ‘bringing civilisation’ is thus shattered definitively. The most important part of this book, however, is De Kom mentioning countless resistance fighters, who hereby gain recognition. Resistance to the colonisation existed since day one, but this fact is often hushed up.

The specific repression of women is also often mentioned in the book: the many rapes during the period of slavery and worse payment of women for the same work later on. Women also had to raise their children after all their hard work. They, too, are not presented only as suffering victims, but as active resistance fighters against oppression. Such is the example of Séry and Flora. After a military expedition by the monstrous colonisers in search of resistance fighters, they were the only ones who got caught. Despite the terrible torture they suffered, they did not betray their comrades – a deed that must be remembered!

‘We Slaves of Suriname’ was not only meant for the Surinamese people. The Dutch working class, too, was to be aware of the exploitation that took place in Suriname. Sadly, a portion of the text was cut out of the final version, but this portion did appear in contemporary periodicals in which pre-publication excerpts were published:

‘And ye, Dutch proletarians for whom I also write this book, ye who had no part in the treasures of the Dutch regents, who in the Golden Age suffered lack and were hung and shot before the Weighing-house of your capital, ye who have known heroes such as the geuzen[1] and who still paint your flags in the colour of the blood of the victims of the Paris Commune, ye who carry not the fault of the rulers, because ye yourselves were ruled, ye shall love the vanguard of our struggle for freedom with us and their likenesses shall be carried in your processions alongside Lenin’s on the day, when the great reckoning with capitalism shall take place.’

The revolutionary in practice

Anton de Kom was not only an author and reader of books; before all else, he was a revolutionary. Since he got his first job at the Balata Compagnie in Surinam, he stood up for the interests of his fellow workers and waged a successful struggle for increased wages with them. In the Netherlands, he taught about Suriname in schools, utilising information he would later incorporate in ‘We Slaves of Suriname’. The entire time he was in the Netherlands, he was connected to Surinamese leaders of the upcoming working class, the difference between them being that these leaders still cherished hopes of convincing the colonial government to treat the working class better. He was the first to assume the position of independence, which the CPN (Communist Party of the Netherlands) took over. The CPN already demanded this for Indonesia.[2]

Arriving in Surinam on January 4th 1933, he immediately begins setting up meetings to continue his teachings on Surinamese history. The colonial government saw him as a communist agitator, continuously following him around and opposing him, yet he tried in various ways to get in contact with the working class. By setting up an advisory bureau, he found himself in a position where workers came from afar to tell him their problems; and he worked to organise them. He postulates: “And perhaps I will succeed in making them feel something of all that hope and courage which lie in that powerful word that I have learned abroad: organisation.” Anton de Kom, however, got arrested on February 1st and sent to jail. After a few months spent in prison, he and his family secretly boarded on a ship headed for the Netherlands. Back in the Netherlands, he continued the struggle for the working class. On his arrival, arranged by the CPN, he pointed out the following: “But now I am here, and I want to struggle with you against imperialism, which is the enemy of white and brown labourers. I call upon your genuine solidarity and sympathy for the unfortunate Surinamese proletariat. Struggle together with your brethren from across the ocean for a better world, where right, freedom and labour shall belong to all.”

He undertook a practical struggle by, for example, participating in demonstrations of the unemployed, many of which were organised by the CPN during the crisis. His daughter later noted that in the 30s, bullying increased in the period of the Sinterklaas celebrations.[3] Anton de Kom thus fought, together with the CPN, against racism as well. He became an important figure in the Netherlands with the campaign against the outrageous Scottsboro legal affair. The Comintern organised a worldwide movement to free 9 Black youths. They were unjustly accused of rape by two white women. In that time, many Black Americans were accused of raping white women, which often led to lynches. Today it is still ‘normal’ to connect rapes of white women to specific ethnicities, particularly in right-extremist circles.

In the 30s, the Surinamese communist Otto Huiswoud also lived in Amsterdam. He was the editor in chief of the English-language periodical published by the Comintern ‘The Negro Worker’, a periodical which fought to organise Africans and the African diaspora in the West and the colonies. The two Surinamese men were in touch and Anton de Kom contributed to the periodical. The moment the Nazis occupied the Netherlands, Anton de Kom also joined the Dutch resistance. Together with other comrades he published a periodical called ‘De Vonk’[4] and spread it around the Hague.

The life of Anton de Kom is a great inspiration for all who yearn for a better world. It is full of decisiveness, struggle, solidarity and comradeship. But he is regularly portrayed as nothing more than a nationalist or pacifist. As has been demonstrated, he was a revolutionary and a communist.  In reports by the Dutch secret service, it is seen as a problem that he connected the race question (i.e. the struggle against racism) with the class struggle. He also continuously tried to unite labourers in workers’ organisations, because this is the best way to oppose cuts and exploitation as a working person. He tirelessly taught the Dutch working class about the exploitation in Suriname and about the fact that this takes place at the behest of the same government that exploits the Dutch in the Netherlands. The important thing is for there to be unity between workers of different ethnicities in their struggle against racism and capital. Only socialism can do away with oppression and exploitation and guarantee a good life for everyone.

“We wish to point out but one thing: coloured compatriots ye were slaves, ye shall stay living in poverty and anguish, as long as ye have no faith in your own proletarian unity. Not with a plot of land here and there and a shovel or plough bought on credit can we be helped. A great plan of national reconstruction is necessary, a plan with collective great enterprises with modern technology in the hands of the workers of Suriname. Our national prosperity shall need to be built with our own hands. This plan demands every effort on our part, on the part of the Surinamese people. Yet first in our country the proletarians must come into a pugnacious consciousness of their class, first they must know to shake off the old slaves’ chains and the old slave mentality.”

Nowadays the ideas of Anton de Kom ring just as true as in his day. His beloved Suriname may have won its independence, but the struggle against imperialist domination continues. The true solution is only possible under socialism-communism.

“My fatherland Suriname may be small and little known in the world, but the oppression of my fellow coloured folk is as bad there as anywhere else, as is the problem of the ‘n*gr*’, which, in my conviction, can only be solved through communism.”[5]

[1] The geuzen (‘beggars’) were seaborne rebels who fought the authority of the Spanish crown before and during the Dutch war of independence or 80-years War, which was an early bourgeois revolution in the 16th and 17th century – translator.

[2] Here are all the nine points which were distributed underground in Suriname – from S. Hira, van Priary tot en met De Kom [from Priary until De Kom], pp. 297-298:

[3] Sinterklaas (Saint-Nicholas) is yearly celebrated in the Netherlands. Sinterklaas is accompanied by a black helper, called zwarte Piet (‘Black Pete’), which is a racist blackface caricature still frequently seen during these celebrations – translator.

[4] De Vonk was a local edition of De Waarheid (‘The truth’), which was the newspaper of the CPN, distributed in The Hague. Vonk means ‘spark’ and comes from Isrka, the early newspaper of the Russian communists edited amongst others by Lenin – translator.