150 years since the Paris Commune 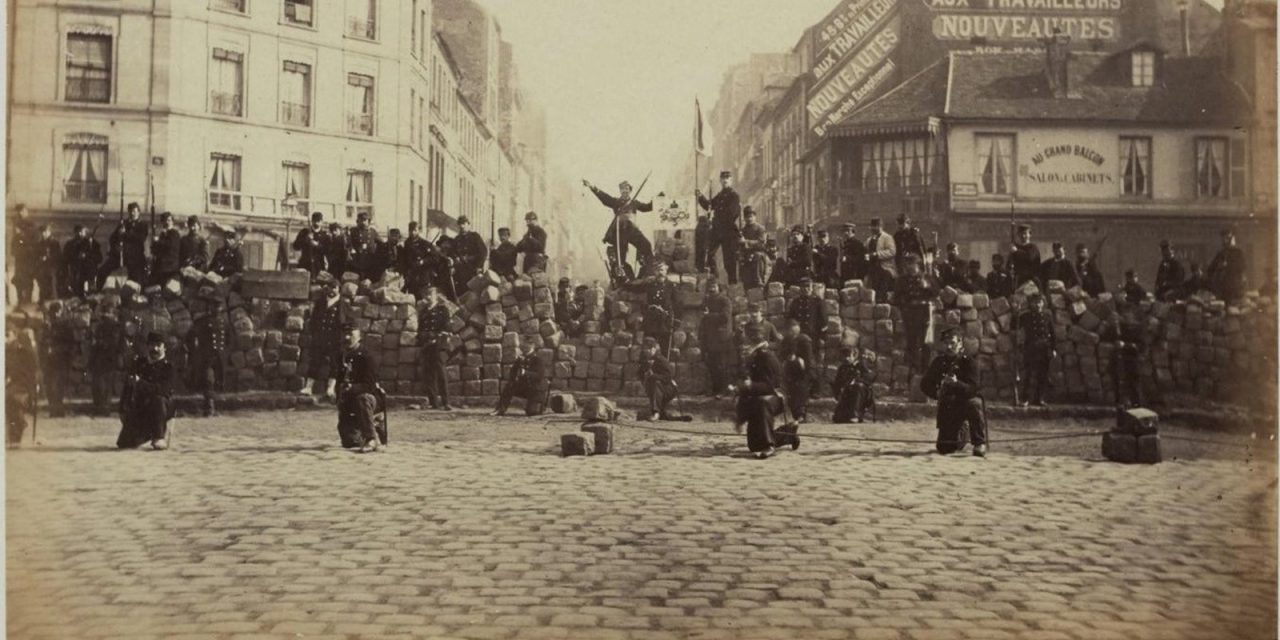 A hundred and fifty years ago, on the 18th of March 1871 in the tumultuous streets of Paris, a revolutionary government of and for workers came about for the first time. For the first time, the working class rose to power and took far-reaching measures to establish a fair society – socialism. A fully democratic government of workers was formed, who decided, for the first time in history, how they wanted to shape their society. The capitalist powers at that time, however, recognised the threat this posed for them. The French bourgeois government even worked together with its arch nemesis, Germany (Prussia, against which France had just then waged war), in order to enact a bloody suppression of the socialist experiment. Today, these historical proceedings still have many lessons to teach us.

How the Paris Commune came to be

The direct reason for the rebellion which led to the Commune lies in the war against Germany, waged for the interests of competing capitalists. To pay for this war, the government of the French Empire had bled the population of Paris completely dry. The French government, however, severely underestimated the war and lost it on all fronts. Emperor Napoleon III was even captured, after which a bourgeois (capitalist) government took over, forming the ‘Government of National Defence’. Meanwhile, the warfront had reached Paris; the city suffered under a siege by German troops. During the difficult times of the siege, more and more Parisians started wondering why they should fight in wars wrought by the ruling class in the first place. This was strengthened by the fact that the defence of Paris was largely carried by the National Guard. These were units composed of regular workers, hailing from the districts which they defended.

The French government finally negotiated a peace treaty with the Germans, which would cast many Parisian citizens into a state of abject poverty. The capitalists wanted the working class to carry the burdens of the war and the payments Germany would receive, and to accomplish this, the bourgeois government wanted to disarm the workers. On the 18th of March, the bourgeois government sent the army to disarm the workers, but this failed, as the working class had organised itself and rebelled. The Commune was born.

Revolutionary struggle for a new society

The citizens of Paris decided very quickly to tread a radically different path from all the preceding governments. A democratic workers’ government was chosen, which got to work on a series of social policies. For example, the army was reformed into a people’s militia, church and state were separated and education was made free of charge. Social legislation was enacted, such as forbidding nightshifts in bakeries; control over factories was handed to the workers themselves if their owners refused to resume production; all state officials received compensation for their work equal to that of the average labourer. In this way, the Commune began with the effort to create a truly different society.

Special attention is due to the role that women played in the Paris Commune. While immense inequality still reigned supreme, the Paris Commune suddenly brought working class women to the forefront of the political developments en masse. Demands such as equal pay, the right to divorce for women, the right to education and all other sorts of women’s rights suddenly gained traction. On April 11th, the Union of Women, which played an important role in the Commune, was formed.

Sadly, this new beginning was cut down in its infancy. The Communards succeeded in expelling the government troops from the city on March 18th, but their attempt at overthrowing the old order was not to the liking of the German government. It freed 100,000 French prisoners of war, who were gratefully reintegrated into the forces of the French bourgeois government. With these fresh reinforcements, the army entered Paris on May 21st. A week of bloody fighting ensued; workers heroically defended the barricades despite an enormous lack of weapons and ammunition. The final barricade fell on May 28th. The capitalists had cause for celebration, and the army ran amok. Over 35,000 people were murdered that week, among whom thousands of unarmed women and children. The years that followed saw a series of heavily repressive measures, which imprisoned another 40,000 people and banished thousands more. In other European countries too repression against the working-class movement was amped up. Capital had proven that it would not go down quietly.

Lessons of the Paris Commune

It is important to consider the significance of the Commune, because it first showed that a different society could truly be possible. In two months, it was able to take more steps than society had taken over the span of entire centuries. The International Workingmen’s Association (also known as the First International), co-founded by Karl Marx and Frederick Engels in 1864, played an indispensable role in the Commune.

The experiences of the Commune teach us that a better society will not come about out of thin air, that it needs to be well-prepared to succeed. We can learn much from the political and organisational weaknesses of the Commune. First of all, it did not go far enough. Many parts of the economy were not socialised and the Commune let the French bank be; this institution then lent millions of francs to the bourgeois government. The Commune also did not use its power to break the resistance of capitalist exploiters in a timely fashion. This happened, among other reasons, because some workers were still under the illusion that a just society could be established without truly ending capitalism, as long as the ‘national interest’ was given prime attention.

These weaknesses had to do, among other factors, with the fact that Marxists, who were affiliated with the International, were not in the majority. Petit-bourgeois currents still had the upper hand. For instance, the Blanquists, who criticised Marxism and the theory of class struggle, were quite influential. They thought that the interests of the proletariat should not be separated from those of the nation (i.e. the capitalists). Followers of Proudhon, the progenitor of anarchism, also were influential. Against capitalist private property they postulated small private property.

The Commune shattered all illusions about any theorised shared interests of workers and capitalists by showing how ruthless the capitalist reaction is. In that single week of 1871, the streets of Paris saw more blood than during the entirety of the ‘Terror’ of the French bourgeois revolution. The Commune also teaches us the importance of proper organising, for the capitalist government was able to beat the people’s militias and the people precisely because they were not organised centrally in a strong enough way.

The most important lesson to be drawn from the Paris Commune is the necessity for a political organisation for and of the working class, the Communist Party. A party capable of comprehending the objective laws of class struggle and of leading on the basis of a scientifically grounded and worked-out strategy. A party which must consistently struggle against the influence of bourgeois and petit-bourgeois ideology in the labour movement, that is to say, against the influence of opportunism (reformism, left-radicalism, etc.).

Marx, Engels and Lenin drew valuable lessons from the Paris Commune. This fact fundamentally contributed to the fact that in 1917, when revolutionary circumstances occurred in Russia, the working class succeeded in establishing workers’ power. The first proletarian revolution held out for only 72 days, the second for more than 70 years.

It is of great importance to critically study and learn from the history and the experiences of the Paris Commune and the international communist movement in general. We live in a time in which the revolutionary working class movement is still weak, but capitalism is faced with more and more of its limits. There is a growing yearning among working people for a better society, a society without poverty, discrimination, insecurity, exploitation and war. A society where everyone has the possibility to develop themselves. This is also expressed by the growth of the CJB and NCPN. We can and must draw valuable lessons from history to strengthen, both in the Netherlands and internationally, the labour movement and the struggle for socialism-communism.

“Working men’s Paris, with its Commune, will be forever celebrated as the glorious harbinger of a new society. Its martyrs are enshrined in the great heart of the working class. Its exterminators history has already nailed to that eternal pillory from which all the prayers of their priest will not avail to redeem them.”