Bad in theory, bad in practice: anti-communism versus the labour and popular movements 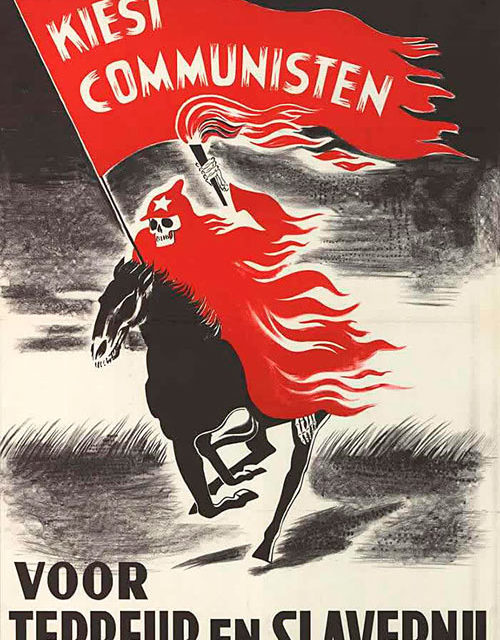 Contribution of the CJB for the 13th “Meeting of European Communist Youth Organisations” (MECYO) in Istanbul.

Contribution for Seminar: “Disproving the anti-communist lies spread by the institutions of the capitalist system. Analysing the objective reasons of the bourgeois’ fear of communism. Defending the heritage of the USSR and people’s republics in Europe. Fighting against anti-communism today.”

We consider this a subject of the utmost importance. In our daily work, one of the most dangerous illusions one could foster is the idea that anti-communism is no longer a threat, because the youth in the Netherlands and the rest of the Western world are no longer being raised in the Cold War mindset. We risk deluding ourselves into thinking that this automatically makes them more receptive towards class consciousness, or at least less prejudiced towards us.

“Vote Communists, for Terror and Slavery!” Anti-communist poster in dutch from the 1920’s

This could not be further from the truth. Anyone who has received any form of secondary education or beyond will also, necessarily, have received some form of historical and political education on socialism, on the history of its construction in the Soviet Union and elsewhere. Furthermore, certain notions about socialism and communism, and their construction in practice, are received through culture, including popular culture or stereotypes.

It must therefore be assumed that every young worker and every student we encounter, including our own sympathisers and members, will carry with them the baggage of the educational system and the broader cultural superstructure. As materialists, we know that its content is not determined at random, by accident, or in a fair and balanced manner, even if all its producers have convinced themselves of this. Rather, it is class-determined, it reflects the needs of our class society and of the ruling, capitalist class.

This is not to say that all educational material about communism and its history consists of crass propaganda and bold-faced lies. The educational system can be creative, adaptive, and resilient, like the capitalist system that produces it. Its lessons about communism can wear the guise of objective scholarship or even sympathy, at least in theory. But the effect is much the same: to keep young people in the dark about their real circumstances and interests, to keep them from struggling and searching for an alternative.

At this point, it is instructive to read what students in secondary schools are taught. The widely used History textbook series Geschiedeniswerkplaats, published by the major publishing house Noordhoff, contains plenty of material on communism and the Soviet Union, particularly in the textbooks for the last years of high school.

The book written in preparation for university takes a scholarly, investigative, and theorising tone. The question then is what type of scholarship, what kind of theory does it advance about communism? The textbook discusses communism as part of the paradigm of totalitarianism. In this theory, communism, fascism and national socialism are different manifestations of totalitarian power, which amount to the same thing in practice: “The common denominator was that they wanted to control people’s lives, thoughts, and feelings completely.” In fact:

“In certain ways, Germany was less totalitarian. Private business and churches were allowed some leeway. The Nazis terrorised and killed political opponents and minorities like Jews, gypsies and homosexuals. They starved and killed psychiatric patients and other forms of “inferior life”. But those who were not ill, not part of a minority, and not political opponents, had little to fear. In the Soviet Union, everyone had something to fear.”

The textbook also has a separate scholarly investigation of communism in a section called, “Communism: a crime or a brave experiment?” Besides the totalitarian theory, it discusses two other historical perspectives on communism:

In all theories, communism is a thing of the past. At best, it was a well-intentioned experiment that failed tragically. This theory is expressed in the popular saying that “Communism is a good idea in theory, but bad in practice”. In which case it is pointless to struggle for it. The more directly negative perspectives “even” attack Lenin. Here we can observe the common trend that, after the “crimes of Stalin” have been sufficiently documented and denounced, Lenin is next in line. Therefore, it is pointless for us to join in denouncing Stalin or any other historical figures associated with socialist construction for “tactical” reasons.

Besides, anti-communism does not limit itself to the historical judgement about the construction of socialism in the Soviet Union and elsewhere. It also manifests itself wherever people struggle, wherever a class-conscious mass movement arises, wherever communists step forward to deepen this struggle. Whenever this happens, the capitalist class (correctly) fears the spectre of communism. In these instances, all the existing anti-communist baggage, all the received wisdom from the educational system, all the received cultural stereotypes about communism, are brought to bear against the struggling youth.

This becomes clear in coverage of the labour and popular movement. For instance, in 2014 the “progressive” website De Correspondent published an article on the trade union movement, hailing the “forward-thinking” wing of the labour movement, especially its official youth sections, and attacking the “defensive activism” of the “old” trade unions. There are several points that distinguish the “new” from the “old” trade union movement:

Although the article seemingly has nothing to do with the history of socialist construction, it is accompanied with pictures of North Korean propaganda posters. Presumably, this is not meant as a compliment for the “old”, “defensive” trade union. The lesson: people who talk about exploitation in this day and age are little more than stereotypes. If you do not want to collaborate in the demolition of your own job security and retirement, you might as well be a North Korean.

What we can see here is the association between communism and totalitarianism, and the association of “totalitarian” stereotypes with even the most basic struggle for economic rights. Therefore, anti-communism does not hurt the communists alone; the “lessons” about the history of the communist movement also serve the purpose of keeping young people from struggling for their interests, never mind developing a revolutionary consciousness.

For us as young communists, this issue is brought back to the forefront with the 100-year anniversary of the October Revolution. We should develop our position on the significance of October and the construction of socialism afterwards, and the hope it represents for the youth in particular. At the moment, our organisation’s defence of the traditions of the communist movement is implied; it needs to be fleshed out and written down to offer a counter-narrative to the anti-communist historiography. We therefore support the effort to combine the content of this seminar into one publication. We look forward to celebrating the legacy of October with our comrades of the European communist youth organisations.