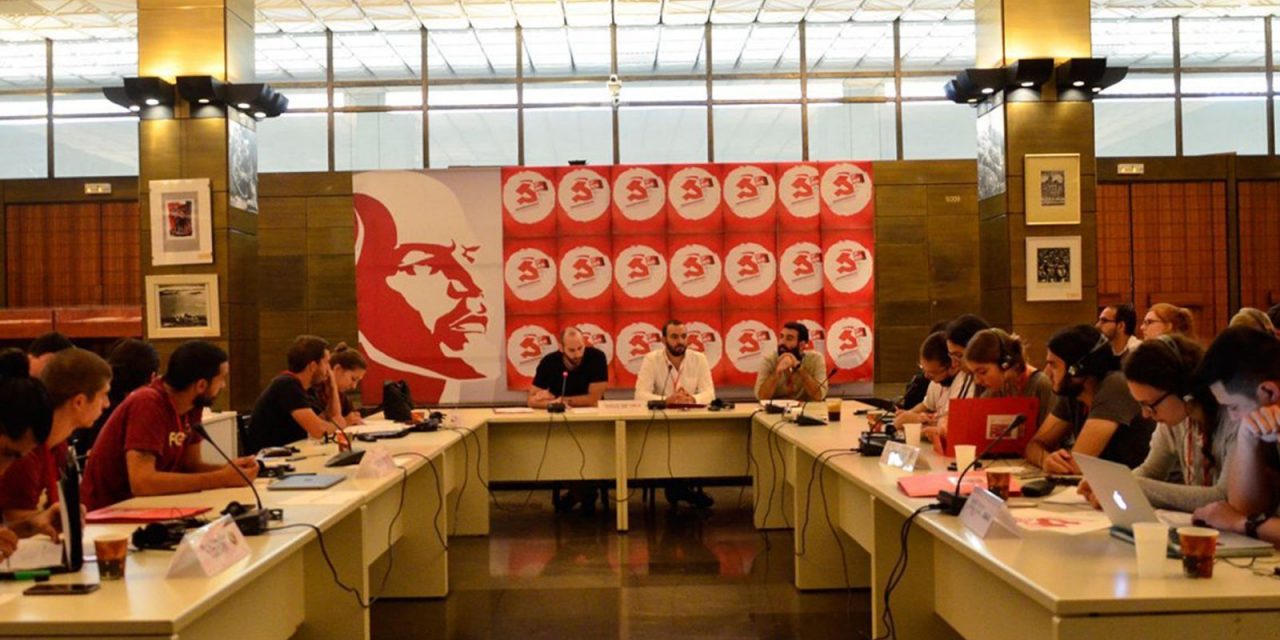 Picture of the meeting of European communist youth organizations in 2018

On Saturday the 7th of November, the day of the anniversary of the socialist October Revolution of 1917, a digital meeting of 20 European communist youth organisations took place, organised by the Communist Youth of Turkey (TKG). The theme of the meeting was: ‘2020: Youth in survival against pandemic and capitalism – socialism or Barbarism’.

It is good to see so many of you in these embattled times. We would like to especially thank the TKG for taking the important initiative for this meeting of Communist Youth Organisations. In all of our home countries we are hit by the Covid-19 pandemic, and the in some ways even more deadly capitalist responses to the virus.

In the Netherlands, as in many other countries, we find ourselves with a health system which has been battered by years of austerity measures. The capitalist mode of health care proves time and time again it is neither able nor willing to ensure the care the people need. Whether it is the shortage of testing kits which were monopolized by the Roche company, or the shortage of IC units thanks to years of neglect and downsizing, every time we are faced with the shortcomings of capitalism.

The number of infected people has risen because of the unwillingness of the government to take measures in an early stage. Thousands have died from Covid and regular health care has now been drastically downsized for the second time since the outbreak of the pandemic because of the shortages in doctors, nurses and beds, which may have dire consequences for people that need healthcare.

The pandemic acted as a catalyst for the outbreak of the new capitalist economic crisis. Our workers are facing mass layoffs. Tens of thousands have lost their job. Workers with flexible working relations and self-employed are struggling to sustain themselves and their families. In many workplaces the protective health measures are lacking. Lots of other workers have to work from home, often without being provided the necessary equipment (such as an ergonomic office chair). The capitalists use teleworking to further blur the limits of the working day and increase work intensity.

In the meantime, students in vocational and higher education are isolated as well. They keep paying tuition fees for education they hardly receive and many are delayed in their studies without compensation. Hardly any protective measures have been taken for students and teachers in high schools and primary education, were up to 30 pupils are stacked in a room as there is a shortage of teachers.

During all this the governments’ policy is mostly preoccupied with ensuring the profits for companies. Once again large bail-outs make sure the working class pays for the continuation of profits for the capitalist class. Sadly, the enormous financial gifts to the companies are not the only way in which the government serves the capitalists. Even the management of the pandemic itself is focussed only on keeping business going as usual. Measures are always too little and too late and try to mostly limit private life and relaxation instead of non-essential sectors of industry. The government does not even try to eradicate the virus but wants to ‘control’ the spread of the virus so that not ‘too many’ people need hospitalization. Anybody can therefore observe how human lives are sacrificed for capitalist profits. Because of this, the Netherlands has a relatively high death rate per capita from Covid-19 compared to other countries. This strategy will cause even greater economic destruction for the working class and will drive unprecedented amounts of Dutch workers into poverty and despair. CJB demands a strategy for eradication of the virus, putting peoples’ lives above profits.

In the meantime, the bourgeois political parties are preparing the ground for the upcoming general elections in March 2021, making all kinds of promises that conceal the attack on the rights of the workers that will follow, regardless of which parties win the elections. The pandemic is also used as an excuse for restraining political rights and enhancing the suppression apparatus of the bourgeois state.

This health crisis is the opening epoch for an economic crisis that was already in the making. Economic growth has been hampering for several years and decreases in the industrial production were already setting in before Covid came around. The real cause of the economic crisis lies not in the pandemic, even though it certainly acted as a catalyst, but in the laws of the capitalist way of development itself. The capitalist economic crisis in its turn amplifies the contradictions between the imperialist powers that compete for the control over resources, transportation routes and markets, increasing the danger for escalations, imperialist interventions and even war in various parts of the world.

The youths of today have already lived through three ‘once in a lifetime’ capitalist economic crises, but this one kickstarted by Covid is likely to be the biggest one yet. The theme for this meeting was therefore aptly chosen: the choice we have before us, is more pressing than ever before. Socialism or Barbarism. It is our task as Communist organizations to organize the working classes to make this choice, or it will be made before us, and its consequences will be felt.

That said, we, the Communist Youth Movement of the Netherlands, are heading for our next General Assembly on the 14th of November. The General Assembly will concern itself with the new statues for the CJB, as well as the political evaluation of the general developments and the tasks for the CJB in the coming years. We have good hopes for the future. We are growing as more and more youngsters turn away from the appalling conditions capitalism offers them. Perhaps even more important, we are educating members to be capable of organizing at the work places and in the schools, in order to create a strong and steeled cadre.

The CJB and the New Communist Party of the Netherlands are steadily working to collectively improve our understanding of the pressing issues that concern the lives of the working-class youth on the basis of Marxism-Leninism, in opposition to the influence of bourgeois ideology and opportunism. Such issues are the international and national developments, the labour and student movement in the Netherlands and the requirements to enhance a class-oriented line, but also issues such as climate change, emancipation of working-class women, the struggle against racism and the discrimination of other minorities, which are all connected to the struggle against the exploitative capitalist system.

Both the pandemic and the capitalist economic crisis have laid bare the necessity of a socialist organization of society. Through central planning and the social ownership of the means of production many unnecessary deaths and suffering could have been prevented. The anarchy of capitalism has however shown its bloody consequences and as infection rates are rising rapidly, will probably continue to do so.

We are grateful for the TKG to organize this meeting of communist youth organizations. The effects of the pandemic and the government responses are felt throughout our countries. It is important we face these challenges united. Let us loudly declare our choice: Socialism-communism is our answer to these dire conditions!”