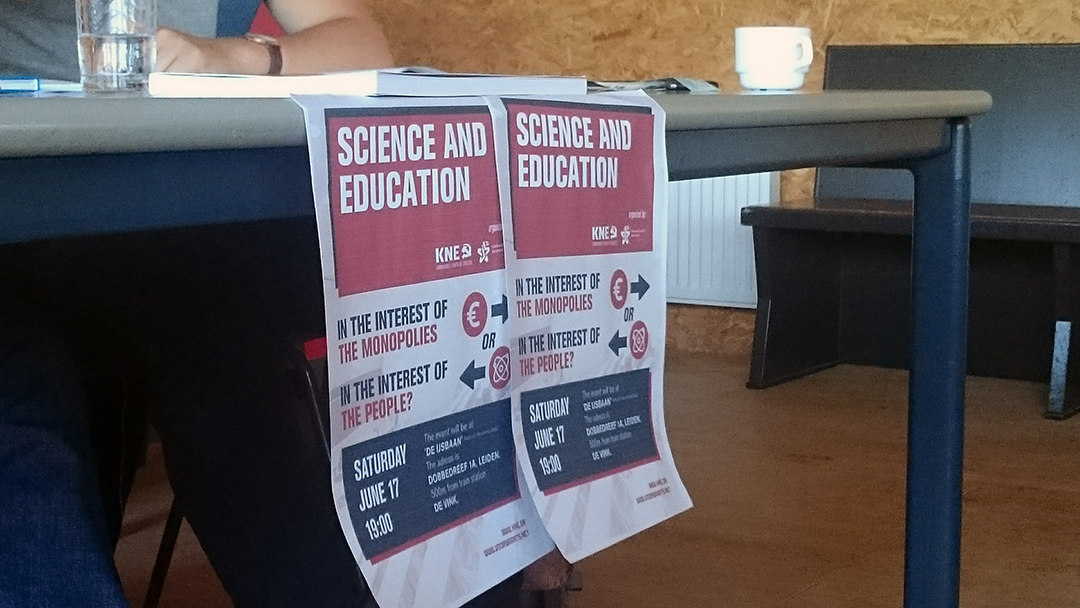 Education system in the Netherlands

When considering the Dutch education system and its development it is important to realize two things. Firstly, the education system is shaped by and under the direct influence of the political and economic changes. Secondly, the fact that the Netherlands is a capitalist country.  This means that private property is the base of the way the economy is organized, and the drive for profit is the driving force for the capitalist economy. These determine changes in the political, cultural, and thereby also educational structure. Education is therefore a fundamental tool to systematically ensure and enhance profits, through its capacity in providing cheap and well-educated labour and also to promote reactionary ideology in favour of the capital.

This function of education is well reflected in the structure of the Dutch educational system. After primary school children of 12 are divided into mainly three categories based on the results of a single test (cito toets). The three categories are named vmbo (preparatory secondary vocational education), havo (senior general secondary education) and vwo (university preparatory education). At the age of +/- 12 the system puts the young girls and boys in a category to prime them for the role “they are meant” to fulfill in the society. From there, the future pupils have principally one direct option to continue to, based on their assigned level during their secondary education. VMBO pupils continue to MBO, HAVO to HBO and VWO pupils to university or WO. However, in theory there is room for transition. It is possible for VWO pupils to do HBO after secondary education, while MBO students can do HBO after their MBO and HBO student WO after their HBO education. In practice, the switch from one level to a higher one is made difficulty accessible through systematic priming of the students. 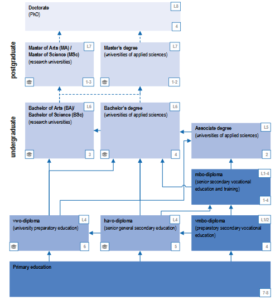 A characteristic aspect of the division in the educational system and in general in the capitalistic system is the differentiation/division between manual labour and intellectual labour. This division is merely a reflection of the contradiction in the social positions of these future workers. During their secondary education, pupils are raised with the conviction that some people are meant for manual labour and others for intellectual labour. This capitalistic concept is used to justify the early discrimination between vmbo, havo and vwo pupils. However, it is crucial to be aware of the relationship between this systematically implemented division and the economical/politic system. Namely that the nature of the capitalistic system to ensure the interests of the bourgeoisie aims to reinforce exploitation of the working class though dividing this class, which results in a division within the educational system. Capitalism tries to guarantee, sometimes successfully, sometimes less so, a steady supply of workers for its different sectors through this division.

Another route through which the capital exerts its influence on education is
the remodelling of education towards the need of the capital, Since the education system in capitalism serves as a machinerie to provide cheap and well-educated labour, it is shaped according to the demands of the labour market. At present times where the technology sector is expanding rapidly and its need for workers is expanding with it, the promotion of studies related to this field is being actively reinforced. This, automatically means that the extra costs for the promotion of these studies is made at the expense of humanities studies, which become less important. Education becomes a simple equation of costs and profits in capitalism, which once again emphasizes the function of education in this system.

The fashion in which the educational system is evolving in the Netherlands reflects clearly the interests of a specific class, the bourgeoisie. The interests of the working class are poorly represented, stronger yet, they are actively suppressed.

Scientific Research and its financing in the Netherlands

Research takes place in mainly three different places in the Netherlands, namely universities, companies, and research institutes. We are focussing on research in universities and how it is financed. Universities are funded through three main routes. The first source of income of universities comes from the government. This part of their income is used for the salaries of the researchers, but also for the maintenance of the laboratory and university buildings. A part of this income is also used for the education. How the university divides this income over her different faculties is up to her to decide. However, this financial contribution has been declining the past couple of years, as a consequence the growing numbers of students. In other words, this means that the burden is being from the government onto the students. The second source of income is coming from independent public organisations such as Nederlandse Organisatie voor Wetenschappelijk Onderzoek (NWO = Dutch Organization for Scientific Research) and de Koninklijke Nederlandse Akademie van Wetenschappen (KNAW = Royal Dutch Academy of Sciences). This source of income is granted in the form of a personal grant or a project grant. The principal of this grant is based on competition between scientists and scientific institutes. The third and final source of income of universities is coming from ministries, the European Union and private institutes, in other words companies. As previously mentioned, the government funding is decreasing and this goes hand in hand with an increase of funding coming from the NWO/KNAW and the EU and companies. This means that universities become more dependent of these two last financial sources. 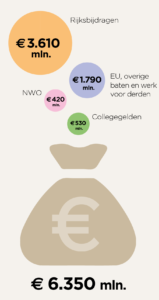 So the remaining main question is what is the consequence of this financing system on scientific research. The growing influence of the private sector on science and scientists causes a huge bias in research by directing the course of science according to the needs of profit maximization, rather than the needs of the people. The growing rate of competition for funding discouraging and inhibiting for scientists. A concrete example is that of the PhD students fighting for a grant and forced to do research in the fields that have the highest chance of receiving a grant, in order to qualify for financing of their project. So, instead of scientists focussing on the content of their research and getting aid for it, scientists are forced to do research conform to the requirements of the market.

The same principle applies from financing coming from the European Union. The Bologna process, which started in 1999, has been used to establish the control of the EU over education and research. The aim of this process is the adaptation of the higher education to the capital, by ensuring a similar framework for the higher education within the EU, in which competitiveness is stimulated and encouraged. A main characteristic of the Bologna process is the still growing dominance of the private companies and monopolies in the education and research through financing. The Bologna process is just another way to incorporate research and education into the capital equation in order to maximize profits for the monopolies. This is no shocking development within the EU, seen that this imperialist union, as it is with the capitalistic system, keeps on exploring and colonizing new territories to ensure profit.

The scientific world as it is now, is not in the interest of the people, but in the interest of the capital. It is based on competition and profit and it thereby works in order to satisfy into the demands of the capitalist. This profit striving character goes without saying in harmony with the exploitation of the scientists and teachers, with the exploitation of the workers. These workers are enchained by the will of the capital, which are taking over the scientific world. Our comrades from the KNE will elaborate more into the different layers within the working class and the role of the intellectuals in this context.

The education systems keeps being remodeled to the needs of the capital. A recent change was the financing of university students by the government. In 2015, the basic scholarship that students received for their education changed into a loan. Education is no longer a right, but a privilege. This change has multiple consequences. First of all, studying at the university is made less accessible to the poor working class, seen that studying equals a loan. Secondly, students are restricted in their freedom to pursue their dreams, especially if their dream careers do not offer certainty that they can pay back their debt. Last but not least, students are forced to choose studies where certainty is offered, which means jobs of which the offer is high in the job market. Eventually this law weakens the position of the working class furthermore in the job market. Workers are forced after studying to accept jobs with minimum benefits for them, to be able to pay their debts.  Thus, the so-called ”social loan education system” is just another measure to ensure cheap labor for the capital and maintain, even increase the rate of exploitation of the working class.

Shortly said we strive for an education system in the benefits of the people rather than the interest of the capital. This means that education and research should be independent of the the determinants of capitalism such profit and competition. Education is not a privilege, which only the rich can access, but education should a basic right for everyone. Therefore, education should be free and public, in order to make it equally accessible for everyone.

In order to avoid (early) division we want an education system in which pupils receive general basis until they are adult enough to make a choice of career. This will give students an equal base upon which they can freely choose, without bias, what they want to do during their higher education. The higher education system should be financed from community sources of the government.

Research should satisfy the current needs of society and should not be driven by the choices of monopolies. Therefore, subsidies of research projects should come from finance sources meant for the community and not from companies. Research is not a tool for profit maximization.

On the short term it is our duty as communist movement of the Netherlands to talk to students, teachers and researchers in universities and schools and mobilize them against the system that is exploiting them.