Protest at the Polish embassy against the persecution of communists 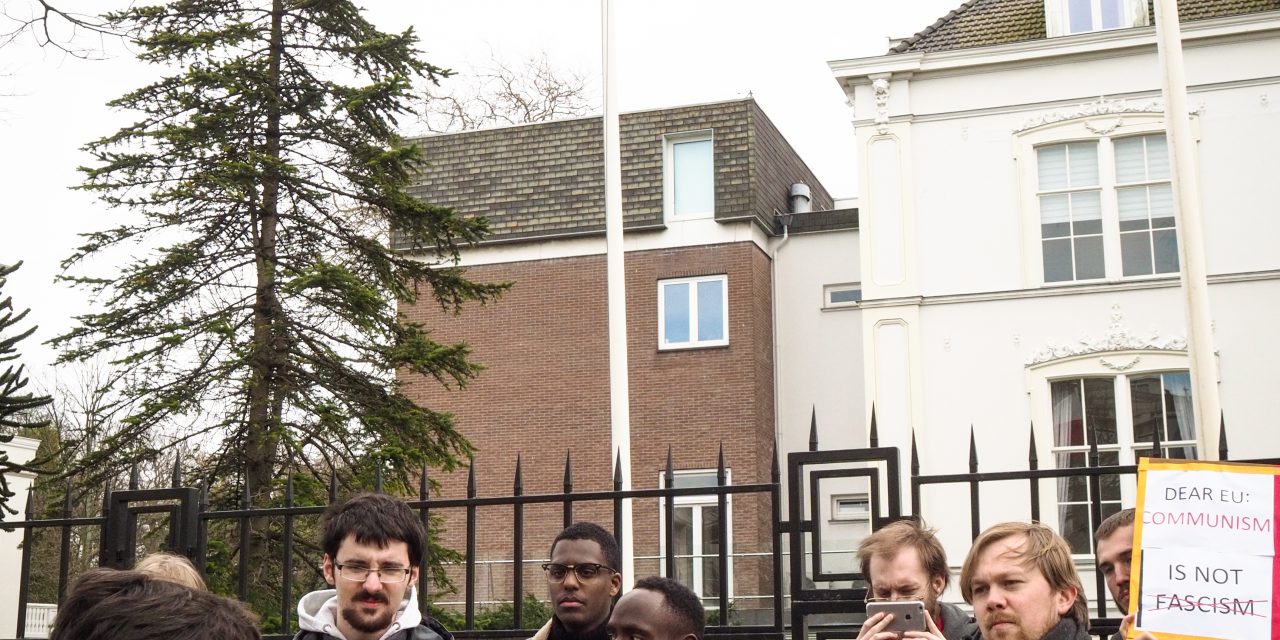 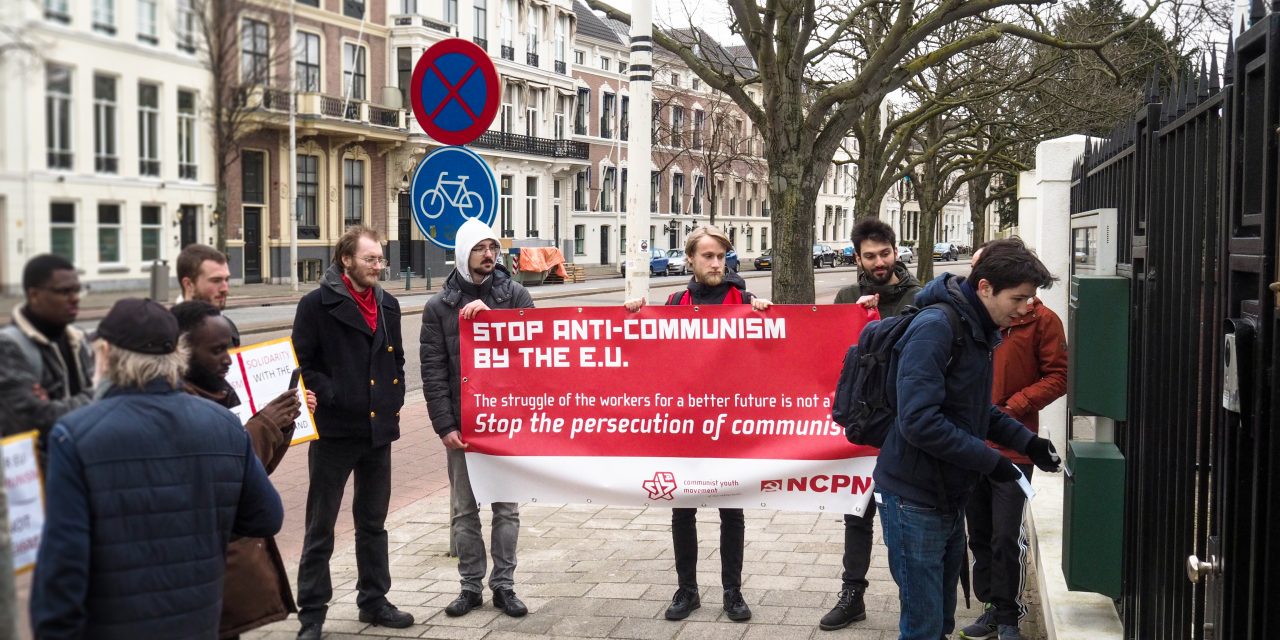 The NCPN and CJB organised a protest at the Polish embassy against the persecution of communists in Poland. The next hearing in the trial against the Communist Party of Poland will take place on the 3rd of March. Members of the Communist Party of Greece (KKE) and Communist Youth of Greece (KNE) living in the Netherlands joined the protest to express our solidarity with the communists in Poland.

Below is the speech that was held at the protest, which elaborates on the persecution of the Communist Party of Poland and the anti-communist policies of the EU.

Speech at the Polish Embassy

There is an ongoing lawsuit against the editors of the newspaper of the Communist Party of Poland, Brzask. This Lawsuit has been ongoing for four years. On the 18th of January they were acquitted, as the court did not find the evidence provided by the plaintiffs sufficient to prove they propagated a totalitarian ideology. The plaintiffs have appealed that decision, and therefore the case has been reopened. The first hearing will now take place on the 3rd of march. It is of course no secret that this lawsuit is heavily influenced and directed by the government. The Communist Party of Poland has called on the communist parties to hold protests at Polish embassies.

Separate of this court battle, the criminal law in Poland has been changed, making the act of showing communist symbols or expressing communist ideas illegal punishable by up to three years of imprisonment.

Meanwhile the Polish government also has a policy of removing or changing any monuments or street names that have any connection to the history of the revolutionary workers movement in Poland or the construction of socialism in the last century. This policy was confronted with resistance in Poland.

This is why we are here at the embassy of Poland.

But these developments are connected to more general developments within the EU. Anticommunism is one of the central elements of the ideology of the EU. There has been a series of decrees and directives which the EU uses to promote anticommunism more and more.

In 2008 there was a large international conference in the Czech Republic, organised by the reactionary Czech government, about the ‘European Conscience and Communism’. The result of that conference the declaration of Prague on June 3rd 2008. It was signed by some 50 members of the European Parliament, and dozens of other reactionary politicians, journalists and historians form all over the EU.

In that declaration there are a whole bunch of appeals. For example, an appeal to declare the 23rd of august a ‘day of remembrance of the victims of both Nazi and Communist totalitarian regimes’. On that day in 1939 the Molotov-Ribbentrop pact was signed. It was a non-aggression treaty that the Soviet-Union signed with Nazi-Germany to gain time to prepare themselves for the upcoming German invasion. In bourgeois historiography this is presented as an alliance between the Soviet-Union and Nazi-Germany; utter nonsense of course. The declaration also calls for a “public debate about the commercial and political misuse of Communist symbols”. they didn’t dare call for a ban on communist symbols yet in 2008, so this is how they formulated it. Furthermore, they call for the “adjustment and overhaul of European history textbooks so that children could learn and be warned about Communism and its crimes in the same way as they have been taught to assess the Nazi crimes.” Clearly a call to actively rewrite history an teach children how ‘evil’ communism has been. Finally, the treaty equates communism with nazism, claims communist regimes started wars of aggression, systematically used extreme terror and supressed all human freedoms, and that they killed and deported entire nations. Communism is even called the worst disaster of the 20th century.

On the 2nd of April 2009 the European Parliament adopted a resolution in which the Declaration of Prague is mentioned and in which many of these points are copied. For example, since 2009 there has been a ‘European day of remembrance for the victims of Stalinism and Nazism’ on august 23rd. The resolution says: “Europe will not be united unless it is able to form a common view of its history, recognises Nazism, Stalinism and fascist and Communist regimes as a common legacy.” So the equation of communism and fascism, also known as the horseshoe theory, is thereby officially established by the European Parliament. All Dutch euro parliamentarians voted in favour of this resolution. That includes the PvdA, GroenLinks, and even Erik Meijer who represented the SP in the European parliament at that time.

What is especially dangerous, is that the EU whitewashes far-right and fascist forces with this policy. In this resolution we find a whole lot of antifascist and antiracist rhetoric, racism and xenophobia are supposedly condemned. But that is pure rhetoric and hypocrisy, as amongst the supporters and even initiators of this resolution we find many extreme right-wing parties who glorify Nazi collaborators

Recently, on the 19th of September 2019, the European Parliament adopted another resolution ‘on the importance of the European remembrance for the future of Europe’. In this new resolution things are taken a few steps further. Not only are communism and fascism equated, but the history of the second world war is entirely distorted and rewritten. The resolution goes so far as to present the Soviet-Union as an ally of Nazi-Germany and accuses the Soviet-Union of being co-responsible for WW2. This whilst the USSR and the entire international communist movement did everything in their power to prevent a second world war. This resolution more or less calls to combat or ban communist symbols, monuments and communist parties.

What is especially dangerous, is that the EU whitewashes far-right and fascist forces with this policy. In this resolution we find a whole lot of antifascist and antiracist rhetoric, racism and xenophobia are supposedly condemned. But that is pure rhetoric and hypocrisy, as amongst the supporters and even initiators of this resolution we find many extreme right-wing parties who glorify Nazi collaborators. Think for example of the ruling parties in many eastern European countries, including Poland, where the persecution of communists is paired with the glorification of Nazi collaborators. The Resolution is also supported by just about every far-right party in the EU, that spread racism and more or less openly take fascist positions. For example the resolution was supported by the Dutch Forum voor Democratie, but also the French ‘Rassemblement National’, the Italian ‘Lega Nord’, the ‘Freedomsparty of Austria’, the ‘Danish People’s party’, ‘Freedom and Direct Democracy’ (Czech), ‘Greek Solution’ and a number of other reactionary parties. For those far-right parties it is not a problem to sign a resolution in which Nazism is condemned, as they now spread their racist and other far-right views under other symbols than the swastika. Fascism is only condemned formally and not substantively, in the appearance it had in the time around the second world war. Current appearances of fascism are given free rein.

For us it is not odd that the EU acts in this way. It is after all an imperialist alliance of capitalist countries, which means that it serves the interests of the monopolies. The EU-legislation advances the destruction of all social achievements, de demolition and privatisation of the social security system, healthcare; the promotion of flex work; education is hollowed out with EU-guidelines and made more and more expensive. People have to work more and harder for less, whilst big business makes massive profits over the backs of the working class. The underlying goal, in Poland and the entire EU, is the stopping of a real resistance, to stop the people from fighting for a true alternative. That’s why they try to hinder every attempt to rebuild the workers movement and try to ban communist parties.

Today we stand here to express our solidarity with our comrades of the Communist Party of Poland and to condemn the anticommunism of the Polish government and the EU. Hold high international solidarity!