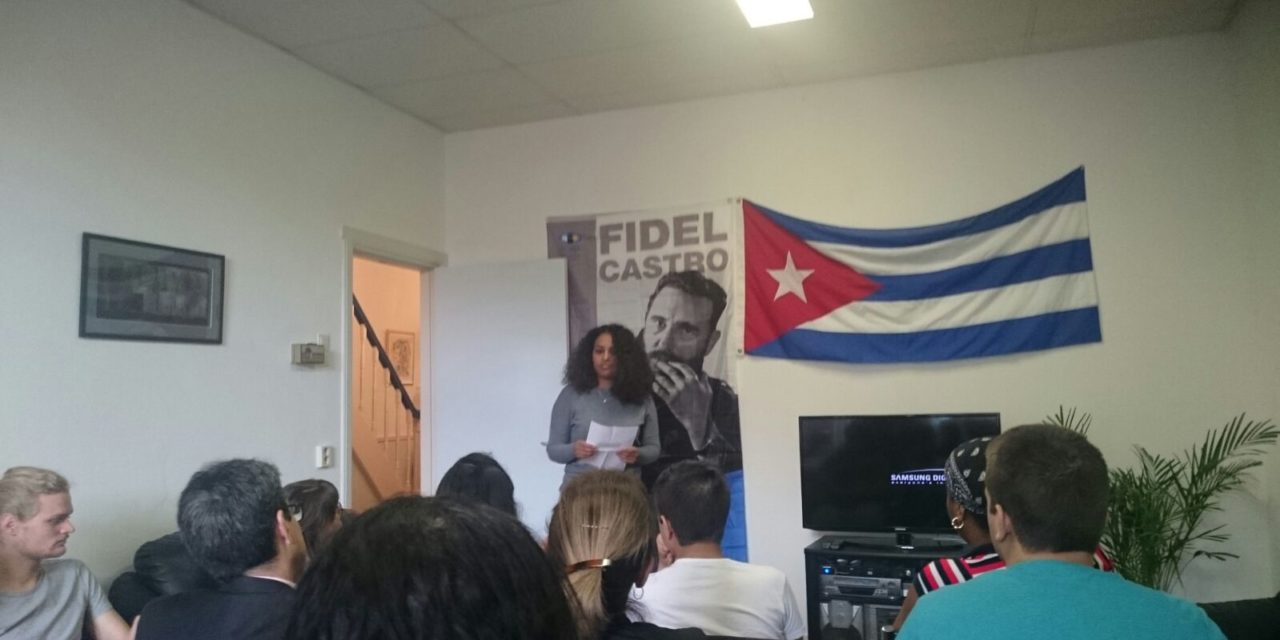 Let me start by greatly thanking the Cuban embassy for their hospitality and comradely support. Today we came together to honor and celebrate the birth (day) of Fidel Castro. Castro was born on August 13th, 1926 in the village Biran in the east of Cuba. Castro led a great uprising against Fulgencio Batista, who ruled Cuba in a dictatorial regime. On the 1st of January 1959, the revolution led by Castro successfully removed Batista, marking the beginning of a Socialist Cuban state. I want to seize the opportunity to shortly mention two important aspects of this gathering.

Not long ago (November 2016), we sadly said farewell to the leader of the Cuban revolution, Fidel Castro. Even after his death, comrade Fidel continues to inspire us, as NCPN and CJB, in our daily struggle against the bourgeoisie and capitalism. Fidel Castro and the Cuban revolution has demonstrated that capitalism and imperialism are not invincible. The perseverance of Fidel and the Cuban people against the countless and aggressive capitalists attacks has taught us to remain motivated and resilient in our struggle. Moreover, they have showed us the extent to which capitalists will go to undermine the socialist cause and development. In this documentary, we will learn more about the countless direct attacks on the life of Fidel, executed as part of the capitalist agenda to overthrow socialism in Cuba.

Secondly, in this light of commemoration, it is necessary to emphasize the importance of solidarity with socialist Cuba. Especially, in these times of shameless imperialist actions of the US and EU worldwide, with the events in Latin-America and Syria being the most recent examples. Even more worrying is the fact that these actions are accompanied by a low class consciousness of the youth and especially, the working class in our society (societies). Learning from Cuban history and implementing this knowledge is part of our fight against capitalism. This knowledge is fundamental for our work towards class consciousness. Therefore, solidarity with our Cuban comrades is an undebatable part of our work as a Dutch communist movement. It is our duty to organize the working class and eliminate her exploitation. As comrade Fidel has said “The revolution is a dictatorship of the exploited against the exploiters”.

On this note, I wish you all an insightful and happy time with us here on this special evening.